Please enter a query below to search through the current blog posts.

Who Is The Most Famous English Painter 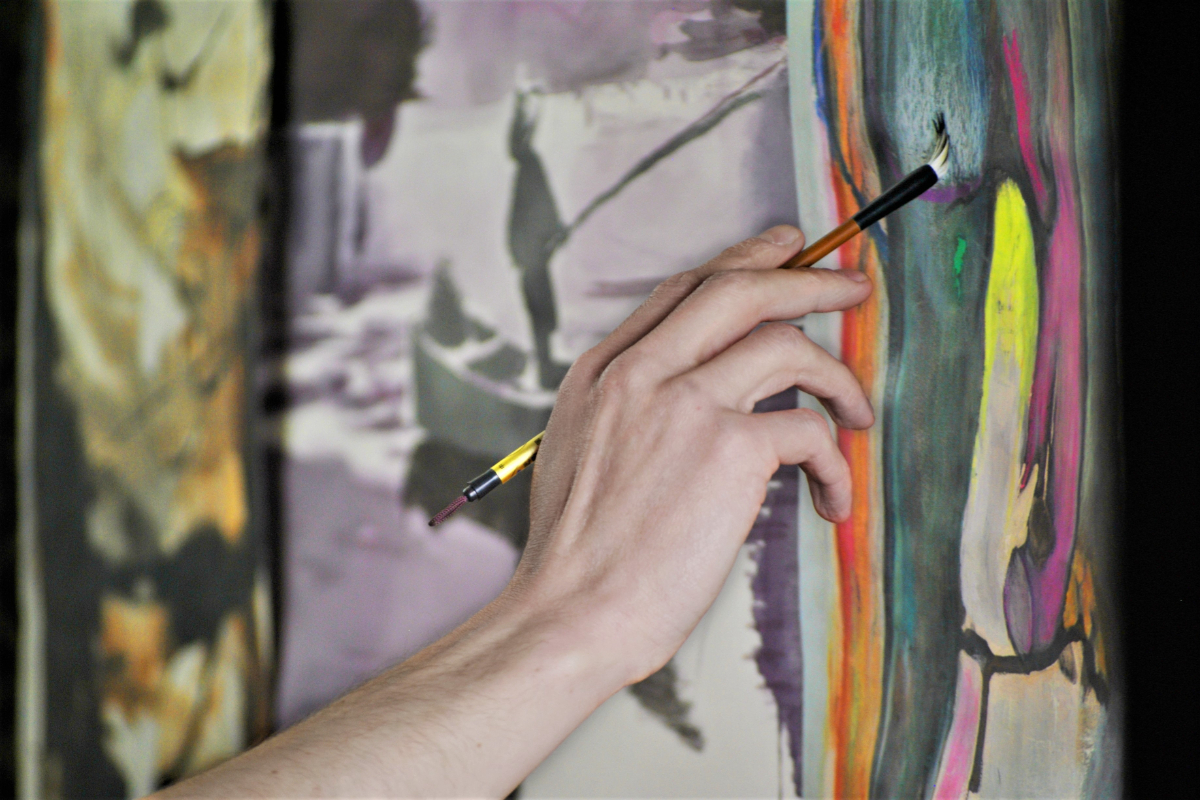 Britain has produced some of the most exquisite painters and fine art around the globe, dating back to the 16th century, all the way to modern art.

Below we discuss the Most Famous British Painters and art history.

In the 2000s Hockney began to work on larger paintings, with his famed Bigger Trees Near Warter (2007) measuring 15ft by 40ft. Hockey always gravitated back to being a portrait painter, as seen in his famous Portrait of an Artist (Pool with Two Figures) (1972). He also appreciated self-portraitures, painting around 300 figures of himself.

With an expansive career stretching over 60 years, in 2012 Hockey became a member of the Order of Merit, and is still internationally considered one of Britain's best contemporary artists.

Influenced by surrealism paintings from an early age, Freud attended various art academies to study art. After the second world war, Freud became focused on portraiture, with his style being thickly impastoed, with sombre and unsettling interiors and metropolitan landscapes.

He preferred family and friends as subjects, although he painted a famed portrait of Queen Elizabeth II (2000-2001).  He required subjects to sit for extended periods, taking interest in nude painting. His work emphasised the erotica of the female form, whilst abandoning the West's idealized imagery.

One of his most famous is Benefits Supervisor Sleeping (1995), later became interested in self-portraits which Freud created over 40, depicting his ageing process from the forties to the early 21st century. In 1983, Freud became a Companion of Honor and a member of the Order of Merit 10 years later (1993). To this day Freud is still considered one of the most important 21st-century self-portraitists.

At the age of eighteen, Bacon visited a Picasso exhibition, and with no formal training, he attended free academies to begin to sketch and paint. Inspired by the style of Eileen Gray, Bacon found a passion for furniture and interior design. But Bacon's true painting career became prominent by 1944, stating himself that his art career was delayed as he spent too long searching for a sustainably interesting subject matter.

His defining triptych paintings were the 'Three Studies for Figures at the Base of a Crucifixion (1944), a similar technique he later used in his 'screaming Popes' series (1949). Specialising in portraits, Bacon's subjects can emit various emotions from power to torment. Art critics believe his work reflects the anguish of the modern-day.

Bacon was inspired by old masters, surrealism, photography and film, as seen with his rendition of Velazquez’s Portrait of Pope Innocent X, refreshed using a Van Gogh colour style to produce the Head series.

He used impressionist brushstrokes and focused on the natural movement of foliage, water and clouds. Sisley's most well-known works are the Street in Moret, Sand Heaps and The Bridge at Moret-sur-Loing.Yet, critics slammed his paintings as too 'impressionist', with his art rejected by the annual Salon exhibition.

Sisley then went deeper into the Impressionist landscape painting style, studying famous masters Constable, J.M.W Turner, Camille Pissarro and Edouard Manet. He is regarded as one of the best landscape artists of the 19th century.

By the age of nine, Millais was accepted into Sass's Art School, to prepare for the RA. He won a silver medal at the Society of Arts for his drawing of an antique, becoming the youngest to do so at age 9 (1838). Later he was awarded a gold medal for The Tribe of Benjamin Seizing the Daughters of Shiloh (1847).

Once a member of the RA, Millais was a key founder of the Pre-Raphaelite Brotherhood, a rebel group of British artists, who dismayed the notion of romanticising art, instead favouring realism, intense colour and endless details. Yet, Millais's first Pre-Raphaelite painting, Isabella was exhibited at the RA (1848).

His most famed painting is of Shakespeare's Ophelia, as she falls into a stream and drowned. So impressed with his work, Queen Victoria dubbed him a baronet becoming the first commoner artist to receive a hereditary title.

In the 2000s Hockney began to work on larger paintings, with his famed Bigger Trees Near Warter (2007) measuring 15ft by 40ft. Hockey always gravitated back to being a portrait painter, as seen in his famous Portrait of an Artist (Pool with Two Figures) (1972).

He also appreciated self-portraitures, painting around 300 figures of himself. With an expansive career stretching over 60 years, in 2012 Hockey became a member of the Order of Merit, and is still internationally considered one of Britain's best contemporary artists.

Inspired by Claude Lorrains' use of watercolours, as a landscape painter John Constable took on the same art medium, exploring the natural and realistic world rather than ideal or romanticised scenes. In 1799, Constable joined London's Royal Academy (RA) as a probationer and set out to attract more interest in RA exhibitions.

Further inspiration came from Gainsborough, Rubens, Carracci and a few similar artists, these grander paintings fascinated Constable leading him to paint 'The White Horse' (1819) and the world-famous 'The Hay Wain' (1821) as part of his 'six-footer' series.

Although beautifully realistic and incredibly detailed The Hay Wain was ignored by British Art Critics, until the painting was purchased by a French dealer, later receiving a gold medal from Charles X.

Gainsborough was one of the most important English artists during the late 18th century. By the young age of 14, Gainsborough was studying art, training below Francis Hayman, portraitist and designer, and Hubert Francois Gravelot painter, engraver and illustrator.

Gainsborough was a founding member of the Royal Academy of Arts (RA) in 1768, creating the famous The Blue Boy shortly after (1770). Other notable artworks include the portrait of Mr and Mrs Andrews and The Painter's Daughter Chasin A Butterfly, which showcase his extraordinary talent for detailed landscapes. He believed blue-hued colours were naturally receding colours and should be used for backgrounds, whilst warmer colours enhanced the subject of the work.

A fast painter, Gainsborough had a prolific career, focusing on ordinary people rather than wealthy aristocrats. He was a leading figure, with many of his works highlighting historical moments missed by fellow aristocratic artists.

After studying old masters in Rome for four years, Reynolds moved back to London and his connections made him immediately successful. Painting aristocrats and royalty owed to high requests, eventually, he devoted himself to this. Reynolds later began painting 'Fancy Pictures', an 18th-century English art style capturing the scenes of everyday life, with a storytelling element as sitters engaged in an activity.

One of his most famous pieces of art is the uncommissioned painting 'Age of Innocence.Reynolds helped found the Royal Academy of Arts (RA), and his passionate Discourses of Art outlined a set of rules regarding taste. Some RA members disliked these demands and formed the Pre-Raphaelites (1848), a society of English artists against Royal Academy Standards of a prescriptive and idealistic approach.

Reynolds is considered the leading English portraitist of the 18th century, receiving a knighthood from King Goerge III in 1769, becoming the second artist to receive this honour.

During William Hogarth's time, highly regarded art collectors had little respect for British painters, instead searching for masterful Italian art. Believing his artwork was just as exquisite as foreign counterparts, Hogarth set out using a newly developed style to cater to his countrymen.

Hogarth's most notable works include his various painting series depicting 'modern moral subjects' like love, deception, ill-fate, illness and death. These are The Harlot’s Progress, The Rake’s Progress, and Marriage a la Mode. Each portrays the weaknesses and misluck of the rich, often falling from grace, with various levels of degradation as the series progresses.

The paintings are filled with detail and everyday activities, creating a story for the audience without words. As they capture the true essence of the time without idealistic tendencies, these series are considered historically and socially essential pieces by art historians.

Known as a great poet, Blake was also a visual artist during the Romatntized era. Working primarily in engravings, Blake was known to create mythical worlds filled with divine figures that shunned the industrialised era and loss of individualism. Contrary to his style and claims of visions, Blake's dismayed organised religion and the bible.

His art emits a sense of mystical power, using text and imagery to convey his message. Originally working in Romanticism, Blake went on to sample various art movements throughout the years. Throughout his lifetime he went unrecognised, with recent polls naming him one of the 100 Greatest Britons (BBC).

Solomon was heavily influenced by Lawerence Alma-Tadema and Frederic Leighton, along with his mentor. Many of his earlier paintings depict classical, celestial and mythological scenes. Soloman later moved on to portraiture, painting well-known people and royalty.

Best known for his innovative portrait of Mrs Patrick Campbell as 'Paula Tanqueray' ARA (1894). Soloman was also a member of the RA and is recognised as a pioneer for the use of camouflage in the First World War.

One of the many famed female British Artists, Thompson was born in Switzerland in 1846, moving to the U.K early on. Her artwork focused on realistic depictions of wartime scenes, like The Roll Call or Scotland Forever.

She later changed subjects as she never wanted to idolise war, instead showing the sombre and heroic scenes. Unlike traditional wartime painters, Thompson was a pretty, young woman, this caused her to gain vast publicity and artistic appreciation.

Starting his career in Rugby School, he soon realised his fondness for art and began studying in Germany, at the Düsseldorf School of Painting.

Best known for his historic and military paintings, Crofts created artworks such as A Scene of the Thirty Years War, Queen Elizabeth I Opening the Royal Exchange in 1570, and A Roundhead On Horseback. His wartime artworks were incredibly popular between 1870-1880s, losing momentum as art critics drifted away from wartime paintings.

With many talents, Batten trailed oil painting, tempera and fresco styles. In true fresco style, his murals were painted on freshly laid plaster, using tempera techniques of fast-drying paints and a binder.

Batten's art focuses on mythological figures using allegorical themes, as seen with "Eve and the Serpent" (1897). Moreover, Batten worked with illustrations and as a poet, later illustrating fairy tales for the Folklore Society.

Gabriel Charles Dante Rossetti was best-known for his formation of the Pre-Raphaelite Brotherhood in 1848, along with William Holman Hunt and John Everett Millais. His art portrays a sense of sensuality with medieval revivalism. Similarly, his poems reflect complex interlocking thoughts and feelings in a sonnet sequence.

He became an inspiration for many following artists like William Morris and Edward Burne-Jones, who were influenced by the Pre-Rapheliatde brotherhood movement. He also help develop the Aesthetic movement and inspired European Symbolists.

One of the most famous British artists, Lowry, was known for depictions of his home in Lancashire, and the North West during the industrial revolution. His distinctive style created the 'matchstick men', and portrayed eerily unpopulated urban landscape scenes, sulking portraits and "marionette" works found after he passed away.

His matchstick men paintings cast no shadows, and Lowry avoided intricate weather effects, gaining him the label of a naïve "Sunday painter" by art critics. Working within the  Pre-Raphaelite Brotherhood, Lowry rejected five British Honours during his career as a protest. One of which was a coveted knighthood (1968). Many of his artworks are now displayed in London and are still heavily admired by the art world.

We hope this page has provided some valuable information about the process of restoring a painting. To discuss your restoration project follow the link below.

As a member of the Guild of Master Craftsmen and over 30 years experience restoring fine art paintings, your beloved paintings are in good hands. If you need help restoring oil painting, contact Alyson today to discuss your project.